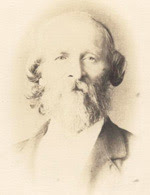 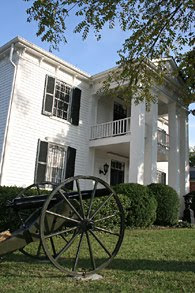 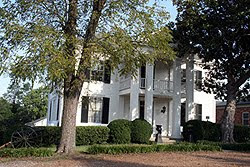 I reached another milestone in the book process yesterday. I have been wanting to tour the Lotz House for awhile now, so I told myself I could go once I finished this part. It's a Civil War era house that was under fire in the Battle of Franklin.
The house belonged to Johann Albert Lotz, pictured at the top.
From the Lotz House site ( www.lotzhouse.com )-
In 1855, German immigrant Johann Albert Lotz purchased five acres of land from Fountain Branch Carter. Three years later in 1858, after doing most of the work himself, Lotz completed his home. By trade, Mr. Lotz was a master carpenter and a piano maker. He also repaired guitars and violins. His home served as his “show house” to demonstrate his carpentry work to potential clients. The three fireplace mantles demonstrate his range from simple to very complex designs.
There are also several battle scars including the charred, rounded indention in the wood flooring where a cannonball flew through the roof, a second story bedroom, and then landed on the first floor and rolled. In addition, the home has an impressive solid black walnut wraparound handrail that starts on the ground floor and wraps all the way around to the second floor.
Can't wait!
Posted by Alicia King at 4:17 AM